It was a light and easy Sunday and we were BGC bound to meet some friends. The night before, I gave them some suggestions where we can eat. They picked out NOLITA! I couldn't complain. I haven't tried it there and I've heard raves about their pizzas and their Mac & Cheese!

When we got there, the place was not really packed but since the space was small, it tends to get a bit crowded. The style was self-service and the ambiance was laid back and relaxed. Perfect for late afternoon chill and chitchat with friends.

We tried the following :

The craziest Mac & Cheese in town! The serving was small but it was filling! Made up of different kinds of cheese, shying away from the usual cheddar. This pal had some blue cheese which added a strong & distinct flavor to the dish. It was also topped with some herbs and Parmesan cheese. Cheese overload but was definitely a hit!

Big slice of pizza with a not so shy price! Doesn't fit one paper plate! It was packed with crusted chicken pieces, lotsa mozzarella and some herbs in a tomato based thin crust pizza. Yummy! You can tell that the tomato based sauce was made fresh.

The burger had a really thick burger patty, some bacon, sunny side up egg and blue cheese in a small bun! They should have used a bigger bun, IMO. Anyway, it was juicy taty and definitely belonged to the protein overload category! The blue cheese gave an interesting contrast to the meat.

The onion rings that we've added to the buger were huge! They were beer battered and a bit oily. 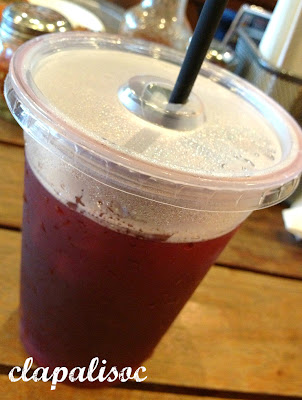 I also tried their brewed herbal iced tea. I was hesitant at first since I was not sure how it would taste. Luckily, they were kind enough to give me some to try it out first! It was refreshing and the brewed tea taste was strong. Though they should have cut a little bit of the sugar.

My pals got the following --

Overall, the food did not disappoint. I just wish that they will look into their air conditioning system because the place tends to get warm and work on a bigger space.