It was a rainy Sunday morning and we where in Tagaytay. We originally planned to go around the place for Cherienne to enjoy but the weather did not cooperate. We woke up really early and with hungry tummies, we decided to head out and look for a place to have breakfast. In search for a store that can be found nowhere else but in Tagaytay, we decided to give Bag of Beans a try. We originally wanted to try their English Pies but once we got there, they were actually offering breakfast buffet. Knowing that my hubby is a big fan of buffets, we went ahead and checked out the food and proclaimed that we will be having buffet for breakfast.

They have a wide selection of food for the buffet. The all time Filipino favorites such as sinangag, tocino (they have pork & chicken), tapa, longganisa (they have Vigan style which is salty & Kapampangan style which is sweet), embotido, chicken arrozcaldo, champorado (made with Batirol chocolate), chicken & pork adobo, tawilis, danggit and salted egg (complete with sliced tomatoes, mangoes & bagoong) are served. They also offer other dishes such as corned beef (sauteed in garlic and small cubes of potatoes), hotdogs, ham and hashbrown. They also have an omelette counter where they cook ham & cheese omelette when you order.

We've tried several breakfast buffets in the metro but it's the first time that I've seen cereals served. They have coco crunch and corn flakes. They also have bread baskets for pandesal, white bread and wheat bread that can be toasted and eaten with a variety of spreads such as strawberry jam, blueberry jam and butter. 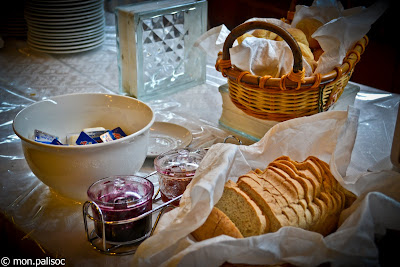 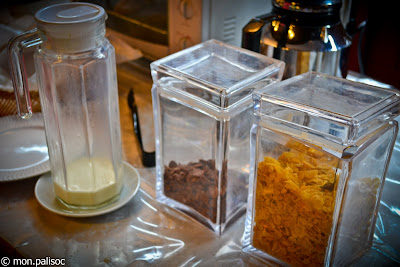 For dessert, they have this round center table filled with assorted sweetened bread, fresh fruits, bread pudding and some kakanin. This table is my table! :)

For drinks (where you don't have to pay extra unlike in other buffets), they have all you can Kapeng Barako, Tsokolate Batirol, iced tea and mixed fruit juice. 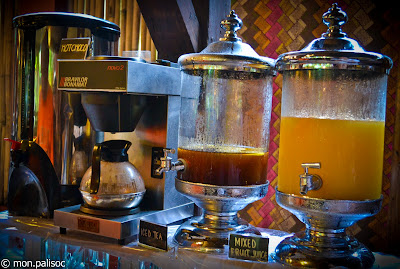 I sampled everything that they served except for the hotdogs and bread baskets. My favorite picks among the main course are the chicken arrozcaldo (salty with full chicken flavor), champorado (with all the Tsokolate- eh richness) and the omelette (with generous heapings of ham, cheese and mushrooms). I also had three cups of the freshly brewed Kapeng Barako (which has a super bold coffee flavor but isn't too bitter), a cup of Batirol, a glass of iced tea and a glass of mixed fruit juice (which I think is four seasons). Hubby was a little picky. He spared himself the usual adobo and tocino. He opted more of the Continental choices with the exception of tapa, Vigan longganisa and danggit. He liked the hotdogs so much (for some weird reason), ham  and omelette. Hubby also had his share of the all you can Batirol finishing around four cups. Cherienne liked the chicken arrozcaldo and feasted on the fresh bananas until she had enough. She was also a fan of the Batirol.

The style of dining in this buffet treat is Al Fresco. The dining area was styled via an open hut that lets fresh Tagaytay air circulate making the dining experience relaxed and enjoyable. The whole place was actually full of greenery and wood crafts. I wonder how it feels to dine there when the weather is all sunny and fair. 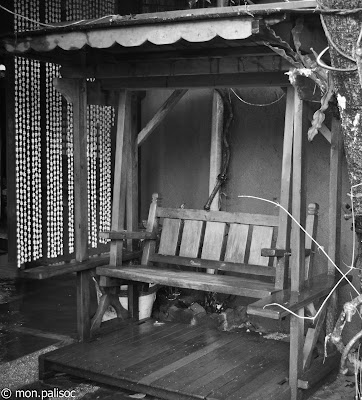 Bag of Beans is definitely a good stop when visiting Tagaytay. The buffet treat is something to try. We would definitely go back to sample their ala carte menu and I would really love to take a bite of their famed English Pies and take a sip of their Coffee Alamid.