These past few weeks I've been craving for some Chilli Con Carne from Wendy's as we've recently been reunited one day while shopping. Imagine that semi-spicy chilli con sauce topping some rice which sustained me for some time back in my college years. I've told my husband the same story and was glad that we shared the same type of meals even before. He then started talking about Miggy's and how he loved the simple, yet affordable food it served, which I remember him mentioning before when we were eating some burritos in Taco Bell. So one night as we were driving by BF, he stopped over Miggy's to give me a sample of the food he's grown with.

Miggy's was a franchise that offered Mexican inspired finger food, wraps and several light rice meals that can quickly satisfy at an affordable price. We ordered several types of food that hubby said were must trys. I thought that he ordered one or two kinds but when the food was brought to us, I was surprised that it was that many he had paid for. There was the Chimichanga, the Quesadilla, some Super Burritos and Chilli Con Carne.

The Chimichanga is a crispy fried burrito that is a light snack that you can bring. Very plain looking, don't underestimate this square-shaped nosh, it packs hearty meat and some rice and spices and is served with some salsa to enhance the flavor in each bite.


The Quesadilla, known to be a tortilla either made in flour or corn that hugs the flowing melted cheese in between each side, is another must try. Although, a bit pricey with just two pieces that form the half moon shape that it presents, this  should be taken as a side order, just as what is indicated in their menu. The soft tortilla can compliment your Mexican meal as each bite gives you cheesy upturns to complete your repast.


The main course that we took for the night were the Super Burritos. These burritos were called super mainly because they put everything they can into the burrito that was available. Spicy, the jalapenos were surely something to look out for if you are not a fan of piquant delicacies. Its rice, as it comes yellowish, has its unique zest that is favored by the bits of meat, beans and its soft tortilla. If this isn't zesty enough for you, you can also add some more hot sauce that you can ask for from the staff. :)


To square out the meal and to quell my craving for the night, the Chilli Con Carne I've sampled was enough but not comparable to my fondness of the Wendy's version. Very Mexican in presentation, this sort of 3Cs was served in a nacho tortilla, which formed as a holder of the beans and minced meat. It's sauce was less than what I was used to, making me a bit neutral in the fare that I beheld. Some nachos were included, meant to be dipped (more like to scoop actually) into the sauce, meat and beans that was not that spicy as I expected. Hubby enjoyed it but I wanted to the Wendy's kind more as I've grown accustomed to its taste.

Overall, Miggy's Super Tacos can pass for the quick Mexican fix and give you satisfaction in the food you've bought. Then again, there aren't much stores that you can find in the metro since they closed most of it. Hubby says that possibly this store we've passed by (Miggy's Taco Bar) is the only one left---an endangered specie... *haha* So if you have time, are in the vicinity and craving for some unique snack or Mex food, drop by and sup to your heart's content. 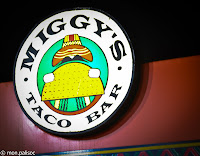