When hubby was in the US, he shared most of his food journeys with me via Skype, MSN messenger and FB messenger. Most of those he visited were nowhere to be found in the Philippines - Stone Brooke, IHOP, Burger Street, Jason's Deli, Cold Stone, Alfonso's Family Trattoria, Panda Express, Rock Fish and P.F. Chang's. He would send snap shots of the food and would tell me stories behind each order. As we decided to wander around Alabang Town Center weeks ago, we passed by this area which was the latest addition to their ever growing al-fresco style mall space. It was lined with expensive restaurants like Abe, Cyma, Chili's, XOI, Johnny Rocket's and P.F Chang's. I think my husband's heart skipped a beat at the sight of P.F Chang's. He was so eager to take me there, to share the food experience, but we just had our dinner that time. He promised, with all his heart, that he will take me there the following week.

Just about this weekend, we decided to give ourselves some break and catch some movie in the cinema. We headed off to Alabang Town Center. Since we had a couple of hours more to spare, hubby fulfilled his promise and took me to a dinner date at P.F. Chang's. The place was all glamoured up, with warm lighting, high ceiling, some Chinese soldier statue, and good taste of adequate adornments. The restaurant space was enormous, with a second floor to boot. The place was packed and so we were seated on the second floor. I didn't get  much chance to take pictures of the resto and was only able to take snapshots from where we were seated.


Hubby was oh so excited to order so I gave him full control of the menu. He had me try those that he ordered in the US. We got  the following --

According to hubby, this is their signature appetizer. Crispy rice sticks topped with a generous heaping of wok-seared minced chicken, mushrooms, green onions and water chestnuts. It came with cool and crisp lettuce cups. 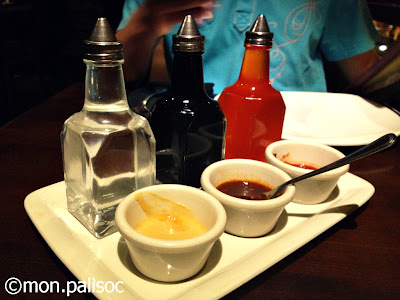 Right before the appetizer was served, our server introduced us to the set of sauces for the appetizer. Three small cups with chili sauce, soy sauce and honey mustard that were to be mixed according to the desired taste of the customer. They came with vinegar, more soy sauce and some more chili sauce to bring balance in case there was too much of one thing.

So, to enjoy the dish, you should scoop out some of the chicken mixture into the lettuce cup, drizzle some of the sauce and wrap away before savoring. It was a delicious, flavorful treat! I liked the refreshing note at the end of each bite due to the lettuce. This dish is a must try!

US Angus Beef tossed in a mild chili sauce with some fresh orange peel, cooked Sichuan-style. The beef pieces were really tender, sauce was thick and a little spicy but was definitely bursting with familiar Chinese flavors.

The serving was good for three but can suffice two hungry fellows. Wok-fried rice blended with egg, soy, carrots, bean sprouts ans sliced scallions. The texture was not dry at all and I would say that I liked this more than any of those Yang Chow fried rice that I've tried so far. It was tasty, with an assortment of spices and was worth it.

For dessert, hubby wanted me to try their signature piece but was already sold out that time. I needed to go for the one that was second on my list - Mango Cream Cheese Wontons. It intrigued me, actually.

Served in a cold platter, these little pieces were made from deep fried wonton wrappers filled with mango and cream cheese served with a thick dark chocolate dip. It was an out of the usual dessert but was delicious!

I ordered for this because it reminded me of my used to be favorite scent from Bath and Body Works - Cucumber Melon. I was curious how it would taste if it was a smoothie. Taking a sip, I noticed that the flavors were not really defined -- tasting mostly of cucumber with a hint of mint.

Hubby's pick! Very refreshing with the ever strong taste of mango and a subtle hint of peach. The best part of it was the strong mint after taste. 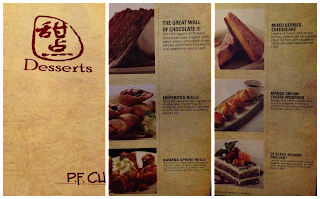 They had an extensive menu with a lot of other interesting dishes to try. Hubby wanted me to sample their signature dessert, Great Wall of Chocolate, but was sold out when we were there. Hubby said that it's a must try especially for a sweet tooth like me. We will definitely go back next weekend to try the famed dessert and get some more of their Chicken Wrap (and of course sample more of their menu items). 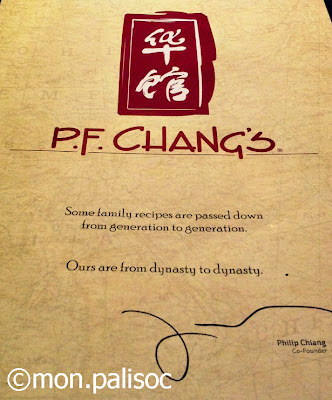 Overall, the ambiance was classy and the food was great! Most of the servers tried their best to be fluent in English. They were also well dressed and were very attentive of the requests of their customers. Hubby noticed that the local prices were almost the same as those in the US. I must say, it was a pretty expensive dinner for two!