The food scene in Manila has been rapidly evolving with more international food chains entering the scene. From fine dining collaborations between foreign and local chefs to direct franchise or branches of well loved restaurants in Asia and beyond, most of these new comers are being welcomed warmly by the ever hospitable Filipinos. One restaurant that has entered the scene just around November of last year has been creating a buzz among meat lovers. They specialize in ribs and offer the biggest and juiciest of them ribs in town. That's Morganfield's for you. 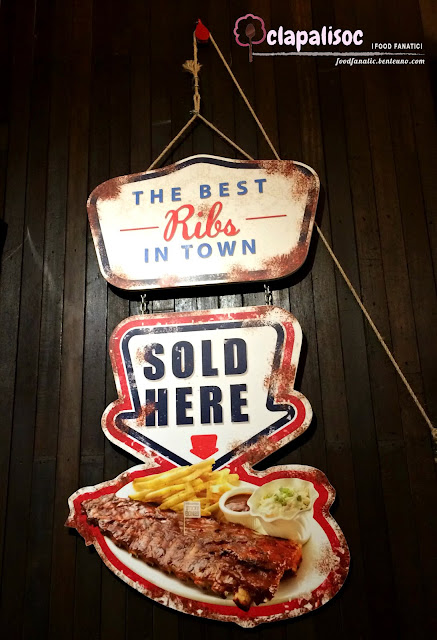 Morganfield's originated from Malaysia and has branches in Singapore and China. Channeling Old American Blues, they combine "Music and Great Soul Food" in the form of their signature "Sticky Bones" prime rib slabs. They take pride in the time invested and quality of ingredients used to make their ribs the best and juiciest in town - marinated for 24 hours, slow cooked and baked for 3.5 hours, smoked for an additional hour and then grilled while basking in their home made tomato based sauce. All of their ribs have been spice rubbed as well with a special mix of herbs and spices. 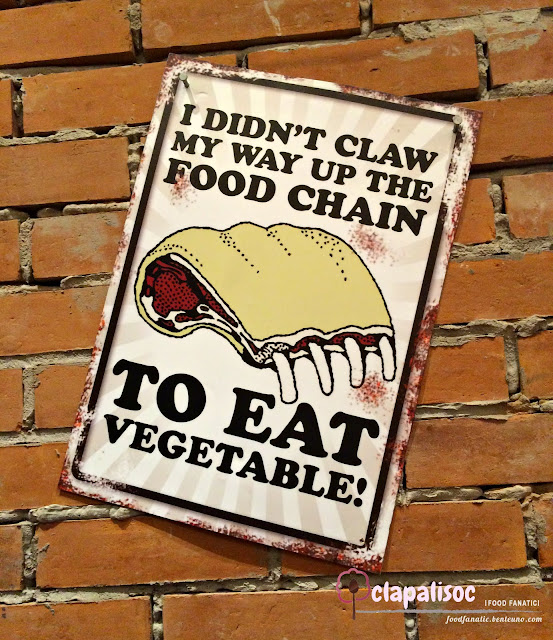 Had the opportunity to be invited in the first looloo Rendezvoos of 2016 and I was more than delighted to know that Morganfield's was the sponsor restaurant. I've been wanting to visit this place. Located in the newly opened Uptown Place Mall, just beside The Palace, Morganfield's has been bringing people to the area. Located on the 2nd floor of the mall, the restaurant was spacious with high ceilings. There's this old American feel inside combining wood and bricks installments.

We got to try the following --

I only got to try the Berry Easy which I liked. It had black grapes, blackberries and strawberries all blended together with ice and a puree of more berries. It had just the right sweetness coming from the fruits and it was refreshing!


The Virgin Apple Mojito was good too according to other loolooers. It had fresh apples, lime chunks, mint leaves, brown sugar and topped with soda. Will definitely get this when I come back.


Least favorite drink of the group since it was too sweet. Could have been refreshing since I like watermelon shakes in general but they overdid the sugar part on this one. It had watermelon chunks and juice, freshly squeezed lime juice, rose syrup and a scoop of calamansi sorbet. 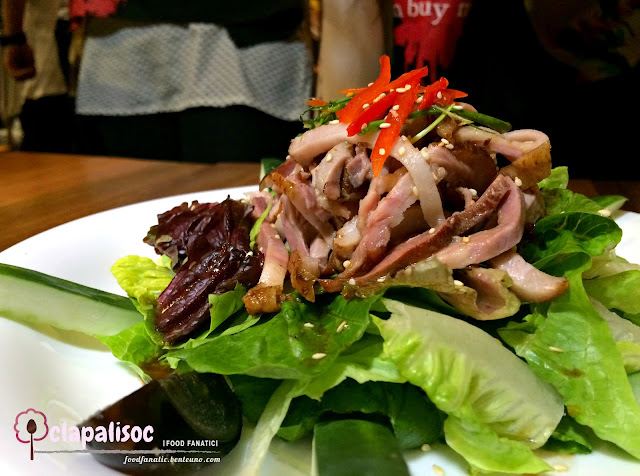 This had strips of duck breast that have been apple-wood smoked, sitting on top of fresh and crisp greens with cucumber sticks, tomatoes, sesame seeds, spring onions, chili, boiled egg and century egg. Loved the tender meat with just the right trimming of fat and that characteristic apple-wood smoked flavor that always reminds me of bacon. This salad had a soy vinaigrette with olive oil as it's base. 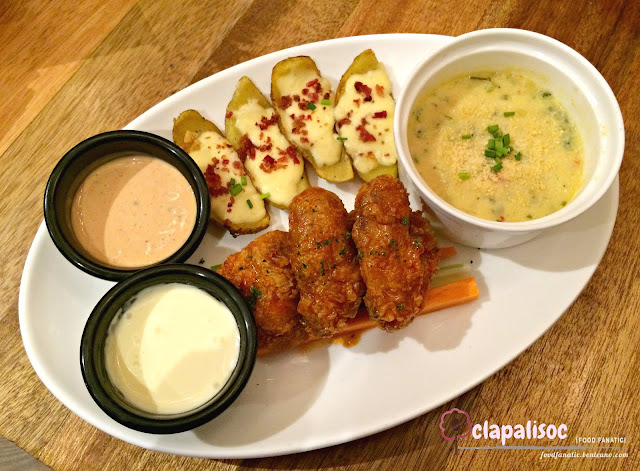 This is their sampler of their best selling appetizers. It had Spicy Chicken Wings, Potato Skins, Crab and Spinach Dip and Nachos for dipping. 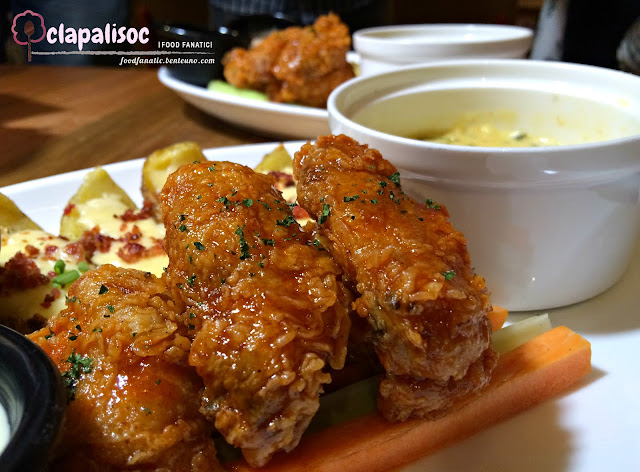 I liked the chicken wings most in this set - crunchy skin even though it's smothered with their spicy and sour sauce. Best paired with the sour cream dip but really, this can stand on it's own. Also take note that it's mildly spiced so you won't get all that sweat in case your not into spicy food. 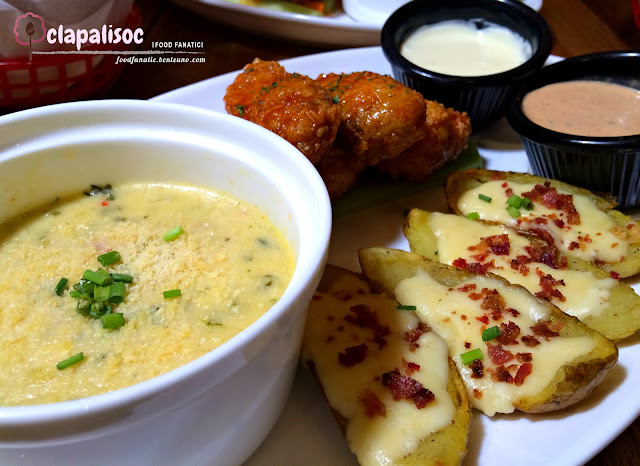 The potato skins were baked with cheese and bacon bits on top and were just okay for me. Maybe if we got the chance to try them while they were still warm with gooey cheese, could have been a different experience.

The Crab and Spinach Dip was good though had a bit of a weird texture. You can taste the seafood that went well with the cheese but I guess I'm more of an Artichoke and Spinach kind of a gal and would stick to that. But then again this one was not bad at all.


According to the Chef, they source out their ribs from Spain. This particular dish uses Black Iberian Pig which are usually small, thus, their meat is expected to be tender compared to the regular sized ones. You have two options here - Jack Daniels Glazed or Jim Beam BBQ served with onion rings or fries and home made coleslaw on the side. We were served with their best seller.


Marinated with Jim Beam, a 900grams rib slab uses approximately 300ml of liquor. But since they slow cook, smoke and grill, most of the alcoholic content gets lost and only the deep flavors of the liquor remains.


This slab was a little spicy with some citrus kick but very tasty and exceptionally tender! No effort in chewing and has that melt-in-your-mouth goodness.


We got to try two of their Spare Ribs or those that they call "Sticky Bones". The Chef also likes calling these "Skater Board Ribs" since they're so huge they can pass as small skater boards!


They don't use Iberico for their Spare Ribs but Chef Chris said that all the same they get these ribs from Spain as well. If your kind of spicy is that coming from black pepper, this one's for you. It's my personal favorite too.


There was no overpowering flavor here. It had a subtle smoked flavor and it had the right saltiness. The meat quality was consistently tender well marinated. Served with red skin mashed potatoes and garden veggies, this slab is huge and really worth the price!


Least favorite maybe because of the bitter after taste that I got from all the garlic bits smothered over this slab. It wasn't bad at all, still tender and melt-in-your-mouth. According to Chef Chris, they use about 100 cloves or 10 bulbs of garlic for each whole slab thus you'll get that strong garlic taste in there.


Served with crispy french fries and coleslaw, this deal is sweet and tangy, loaded with garlic and some spicy kick!


We also got the chance to try their New York Strip Loin Steak. Meat was from Australia and if you're wondering what a strip loin is, according to Chef Chris, it's the meat you'll get from a T-Bone. Steak was grilled to medium done-ness with nothing but salt and pepper to bring out the natural juices and flavors of this meat that came from a grass fed cow. Served with a Merlot Garlic Butter, which is butter with heavy cream, garlic and Merlot, this is something that's okay to skip.


I was expecting tender and juicy steak but what we got was a bland piece of meat that wasn't so tender at all. Even the butter which was supposed to be somehow it's saving grace failed to deliver.

Overall, I liked this dining experience - food wise and ambiance wise. It's recommended to go here as a group since their serving of ribs were huge! They also offer cheap beer that would definitely go well their ribs.

4 out of 5 Stars for Morganfield's!