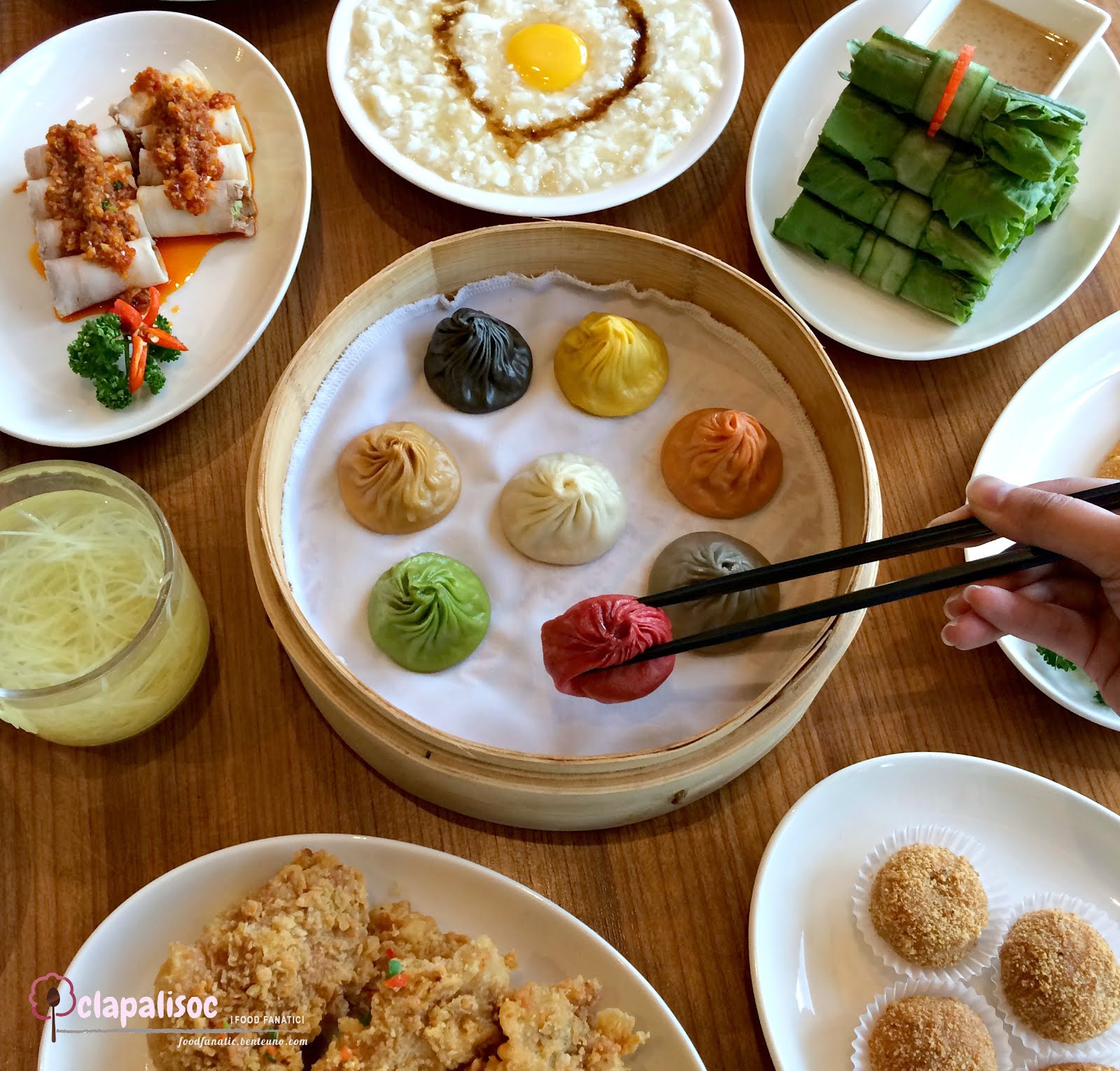 Ever since Xiao Long Bao became popular in our country, Chinese restaurants here and there have come up with their own versions. Prepared in "xiao long" or small bamboo steaming baskets, this is where these tasty dumplings with soup inside got it's name. We've tried a couple from those in seemingly dirty stall in Binondo to the high end Chinese Restaurants lacing the Metro. Some were good, some meh and we definitely have our favorite. Most restaurants carry the classic flavor with tasty soup and meat, one dared to create new flavors but were so expensive.


Then came Paradise Dynasty. Originating from Singapore, this casual dining concept by Paradise Group has a promise of affordable selection of Northern and Southern Chinese cuisine. They specialize in Xiao Long Bao and they're the first to introduce eight first of it's kind flavors.

Got invited for lunch over at Paradise Dynasty and since I have been eyeing this restaurant since it opened in September, it was a definite YES for me! Paradise Dynasty x foodfanaticph = YAY!

Tagged along my homies from foodsocietyph - Ruth D., Ruth S. and I met at the restaurant. Their manager, Jenny, greeted us and prepared a feast for us!

This was one unique appetizer and I surprisingly liked it even though I don't fancy dates that much! It was sweet with a good chew from the rice and a little subtle date flavor.

Ms. OC made this salad for sure lol! Neatly rolled and stacked lettuce that were fresh and crisp, dip into the sesame dressing and you're in for an "organized" salad treat!


Thinly sliced pork, rolled and topped with garlic and chili, loved the cold meat and the simplicity of this dish.


Tasty steamed pork dumplings, packed with generous serving of minced pork in a spicy vinaigrette. These were so good, just thinking about them makes me drool!


I have never encountered such an appetizer before. I enjoyed Hainanese Delights' Radish Cake but that was my first and last encounter with anything straight forwardly radish. These little pastries from Paradise Dynasty were so delicious! Loved the crunch from the flaky pastry and the savory taste from the thin strips of radish inside. You should not skip this when in Paradise Dynasty.

Individually served in a nice ceramic bowl, this tasted like our local Tinola. The broth had a good salty chicken flavor with a hint of ginger. The meat was super tender!

This, for me, was the highlight of it all. We were served at first with a basket of their Signature Original Xiao Long Bao and a two baskets of their Rainbow Xioa Long Bao. Then, we were asked which flavors we would want to order more so we got Single Flavor Baskets of Truffle, Foie Gras and Crab Roe.


Definitely one of the best Xiao Long Bao's in the market! The intricately thin skin was made with 18 folds to give it that beautiful finish that's the signature look of Xiao Long Baos. You have to be very careful in handling these coz the skin raptures easily and trust me, you don't want the broth to go to waste - not a single drop of it. Why? The broth inside each Xiao Long Bao was clear and non-oily and it was immensely tasty! The pork inside was equally good.


Then we tried the colorful basket of Xiao Long Bao with 8 flavors - Orignal (white), Garlic (gray), Ginseng (green), Foie Gras (flesh to light orange), Szechuan (red), Cheese (yellow), Crab Roe (orange) and Black Truffle (black). Mind you, they don't use food coloring to create these. According to one of the staff, they use natural pigments, extracted from plants. 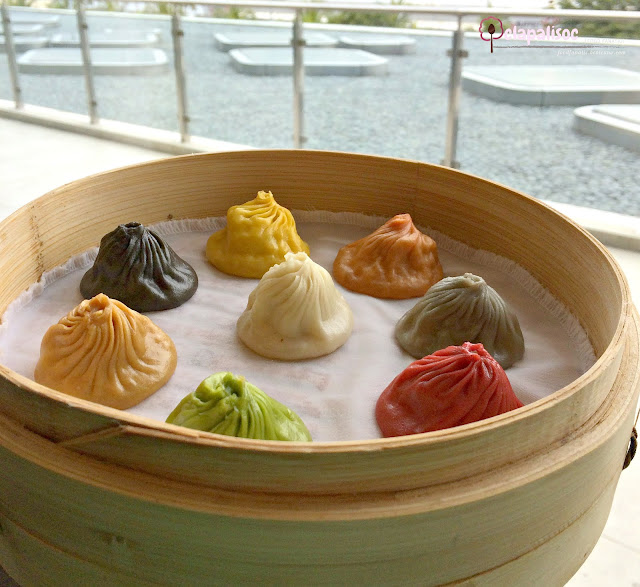 There is a manner of consuming these colorful pieces. You have to start with the original flavor, following this sequence - Original > Ginseng > Foie Gras > Black Truffle > Cheesy > Crab Roe > Garlic > Szechuan - to get the most out of each flavor. Honestly, I wasn't able to try all flavors, which is why I'm so giddy to go back ASAP!

Anyhow, I got to try the following --

Cheese - tasty broth infused with cheese. Nothing too overwhelming here, just a subtle flavor of cheese which went well with the pork.


Crab Roe - this was one of my favorites! That delicate flavor of crab roe married with the tasty broth, such an explosion of flavors!


Black Truffle - I was expecting a strong truffle flavor here but there was just a hint that left me wanting some more. If you are not into truffle, this can be a good start for you. Nonetheless, because of the tasty broth, this was still good.


Foie Gras - golly! This was my ultimate favorite! When we were asked to order Single Flavor Baskets, this was my bet right away! I can't forget the explosion of all things wonderful as I took a bite - the very distinct taste of foie gras married so well with the broth and pork creating an unforgettable flavor orgasm inside my mouth! It was so good I think I ate four pieces of this!

Moving on, we also got the chance to sample some of their hot dishes:

Small but flavorful pieces of shrimps, I loved that they were perfectly cooked with that certain bite that tells you that they weren't overcooked.


There's a story behind this dish. According to Jenny, during the old times when the people of China can no longer provide crab meat to their Emperor due to availability issues, they thought of coming up with an alternative that would look like and taste like crab meat. They came up with this dish.

Served with a raw egg yolk on top to be mixed, the texture was really like that of a crab meat in the form of a thick soup. The delicate egg whites had a nice soft texture. It was overall salty and the addition of fish gave it that much needed crab like flavor.

Shredded pork in a thick sauce, served with Chinese crepes. At first I thought this was made up of noodles instead of shredded pork. 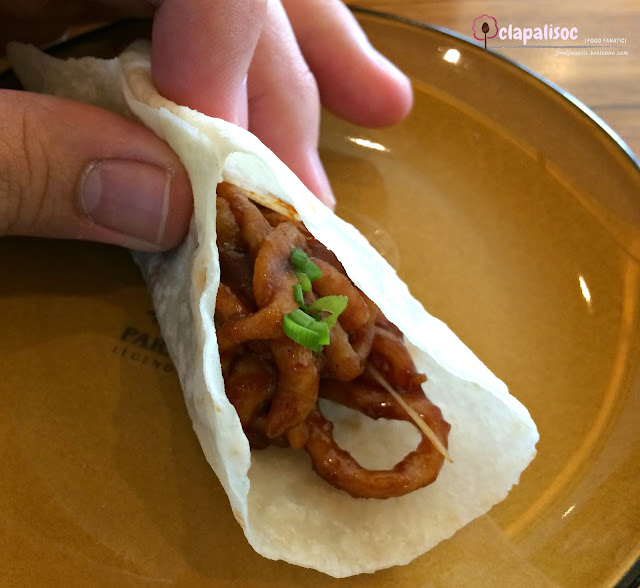 Take a spoonful of the savory dish, put in on top of the crepe and wrap it up. Simple, tasty, delicious!

Tender meat, crunchy breading, good garlic flavor - this dish is a must for pork lovers!

Lots of chilli in this dish but it was delicious! The chicken chunks were tender and very tasty - salty and good proportion of black pepper too.

This was a pretty good but very spicy soup! It had generous heaping of thin slices of beef - tender and flavorful meat. The soup was spicy but you can still taste the flavors of the broth. Serving was huge as well!

From their Rice and Noodle section, we tried their Shanghai Fried Rice and La Mian Noodle.

Fried Rice that's loaded with shrimps, pork bits and some veggies - this can be eaten on it's own! It was delicious and I loved it!

La Mian or hand-pulled noodles is another specialty of Paradise Dynasty. They make their own noodles so you have that guarantee that each batch is freshly made. They have several combination bowls for these fine and silky threads and we got to try the one that's served with a dipping sauce. Simple, clean and light - the broth of the dipping sauce had a good pork flavor. 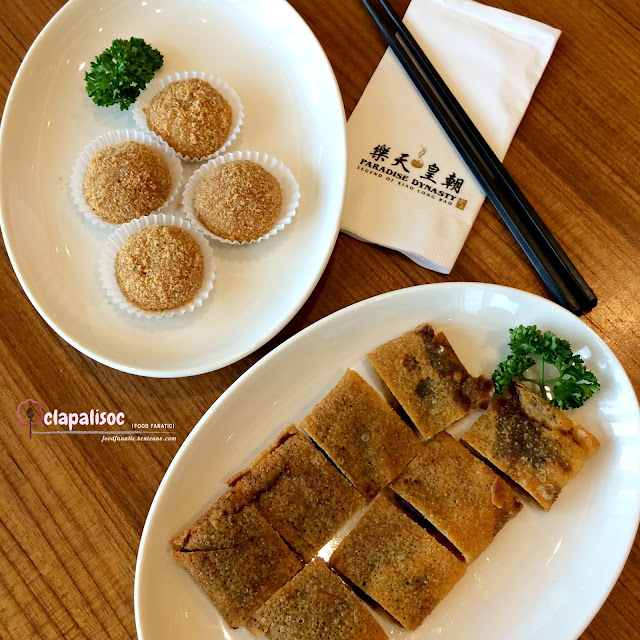 Onto the desserts, we had an overload of glutinous rice and a Pan Fried Pancake.

A new take on the usual Red Bean Paste dessert that's enveloped in glutinous rice, the crunch from the pancake was a nice touch and the red bean inside wasn't too sweet.


Here is the usual counterpart of the one above. I loved the chewy glutinous rice roll with just the right ratio of red bean paste. I also liked that each roll was covered with grated nuts that added texture and flavor.


Another chewy glutinous rice dessert which I absolutely liked! I think I have an affinity with glutinous rice and I really love anything made out of it. This was no exemption. Loved that it wasnt too sweet and that each ball was covered generously with grated nuts.

Also got the chance to try their Water Chestnut Drink (Cold) and it was so refreshing! It was kinda sweet but it was overall light and good!


Then there was Watermelon Shake which was as expected very refreshing!


I absolutely loved our lunch at Paradise Dynasty. Aside from the good food, the restaurant had good interiors and a good view of the bay too. As soon as you enter, a sophisticated Chinese Restaurant charm will greet you - lots of lanterns lined up adorned the walls, a play of wood and marble, huge carvings of dragon, private rooms, cushioned chairs and an expansive wall of glass to give you a grand view of the bay and lots of natural light as you dine.

They also have private rooms if you want a more intimate set-up or if you are looking for a place to have a meeting over lunch or dinner.

5 out of 5 Stars for Paradise Dynasty!