Have you ever heard of Hunan Cuisine? From the sound of it, I knew it was Chinese but to be honest, I have never heard that there is such type of Chinese Cuisine. I know the popular Cantonese, which is what we are usually served in Chinese restaurants, then Sichuan which are mostly spicy dishes and of course the upscale Chinese Fusion types. But Hunan? I needed to research a little about it.

With the help of google, I found out that China actually has 8 Regional Cuisine locations (you can read more about this HERE) and Hunan, being a province of China is one of them. Also known as Xiang Cuisine, Hunan is more like Sichuan in style because of the heat of the dishes. While Sichuan uses peppercorn as it's major spice agent, Hunan uses chili peppers. Other than that, Hunan dishes are heavy in other spices too.

When I got invited for lunch at Uncle Mao's, I was both excited and scared because I like spicy food but my tummy can't take those that are very spicy! Anyhow, I gave in to kill the curiosity. Off to Poblacion, Makati. The directions indicated that it's right across Century Mall. Problem was, I have always entered Century Mall through the parking lot so I did not have an idea where it was exactly. We tried using Waze, which pointed us to the location, errrr almost pointed us to the right location, but still missed it. You see, the building was right smack the intersection, facing Century Mall's main entrance and if you are driving, you would miss it since your attention will be towards the curve where traffic is directed. Anyhow, I managed to spot it and went all the way the second floor to find the entrance to the restaurant.

The place looked like your usual Chinese restaurant with a lot of tables and function rooms. The traditional round tables with Lazy Susan where present with Chinese lucky charms all over. The smell of incense was also very evident. The owner, Irish, was there and was very accommodating. She introduced their best sellers, recommended dishes for us to try and explained what was in each dish. They have an extensive menu so it'll be quite a challenge to order especially if you are a first timer without any clue of the cuisine.

Anyhow, we tried the following --

One of their best seller, a favorite of both their Chinese and local patrons, this dish looked intimidating at first because of all the overflowing chili oil plus red chili and peppercorns. I thought it would be super spicy, chemical level but to my surprise I would just categorize this as spicy!

The fish fillet was tasty on it's own and this dish also had some bean sprouts. According to the owner, Irish, this dish can be served with a sweet and sour sauce, which most Filipinos like. Thumbs up for allowing customization at some level!

This dish channels our local "Papaitan" but in a very spicy way! The dish was literally swimming in chili oil and red chili peppers! It had an interesting assortment of ingredients --- bean sprouts, squid, pig intestines, bladder, boiled pig blood and even eel! Definitely NOT for the faint of heart!

I tried it and oddly, I liked it. Not something that I would rave about but it wasn't bad at all. Pass the spiciness, it was flavorful. Level of spiciness: VERY SPICY

Then my favorite dish of all - Preserved Pork with Dry Radish. The preserved pork slices reminded me so much of thick cut bacon. The pork slices were tender, salty and really flavorful with that strong smoked bacon taste which I really enjoyed. According to Irish, the meat was imported from China. The dish also came with dried radish which was surprisingly good and complimented the saltiness of the pork slices. Best of all, this dish was MILDLY SPICY so I was able to eat a lot!

Thank God for this dish! IT WASN'T SPICY AT ALL! It's one of those dishes that you try to munch in between spicy dishes to neutralize the heat! 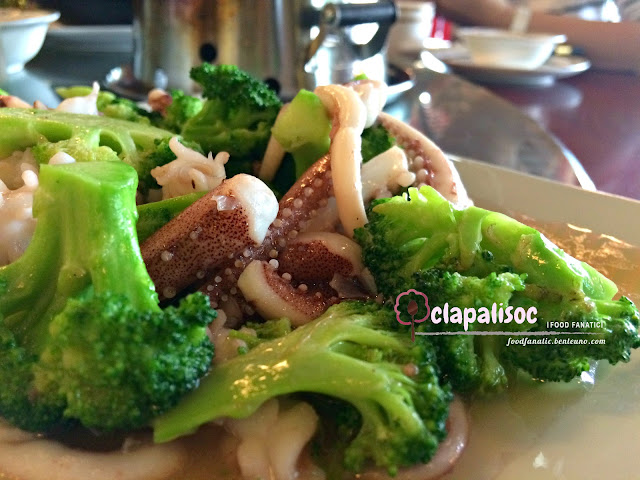 It was simple - squid that was cooked the right way with green and crunchy broccoli in a very light sauce that was reminiscent of Chopsuey. I liked it. It was simple and healthy!

This dish was okay. Chicken pieces were stir fired with lots of red and green chili peppers as well as red and green bell peppers. It also had some spices. All I got to taste from this dish was the spiciness and I think this is okay to skip. Level of spiciness: SPICY

This was something I liked as well. I haven't had a lot of dishes using duck as it's meat and I can't even recall when and where I last had this meat but this dish was something I enjoyed. There wasn't a lot of meat actually. There were more bones in it. However, the meat was flavorful and tasty. The sauce it was cooked with was soy sauce based and had lots of chili oil and red chili peppers. It was also cooked with some potatoes. Level of spiciness: SPICY

This was also good. Strips of pork in a soy based oily sauce, the pork strips were tender and flavorful. I think it was taosi that gave this dish that characteristic saltiness plus it also had some hint of sweetness in it. Level of spiciness: MILD

This dish had nothing in it but pork and some sauce. Another NON-SPICY dish, it reminded me of our very own Adobo. Pork cubes were tender and flavorful but then again there was a lot of oil.

Loved this dish as well! It was like Beef Salpicao. The beef pieces were tender and tasty with lots of red and green chili peppers and was a bit oily. The cumin powder made this dish unique. It rendered a strong flavor and went well with the beef. I liked it a lot!  Level of spiciness: MILD

I tried my very best not to over eat rice because when you're eating spicy food there's always that temptation to make rice your neutralizer of the heat. I also tried not to drink too much water to avoid bloating. Hot tea was actually a good idea and just like any other Chinese restaurants, they serve unlimited hot tea.

Overall, I liked this dining experience. Prices can look a little steep per dish but take note that their serving sizes are good for about 2-3 and those with a lot of soup are served in huge bowls and can even be shared by 5.

I always like discovering new cuisines and flavors. If you are more adventurous, you can scan their extensive menu and go for the other interesting dishes that they have like Eel in Hot Chili Sauce, Soft-Shell Turtle cooked several ways, Spicy Stir-fried frog or maybe Sauteed Dried Pig Ear with Chili.

4 out of 5 Stars for Uncle Mao's Authentic Hunan Cuisine!