Manila Creamery - A Place of Their Own, FINALLY! 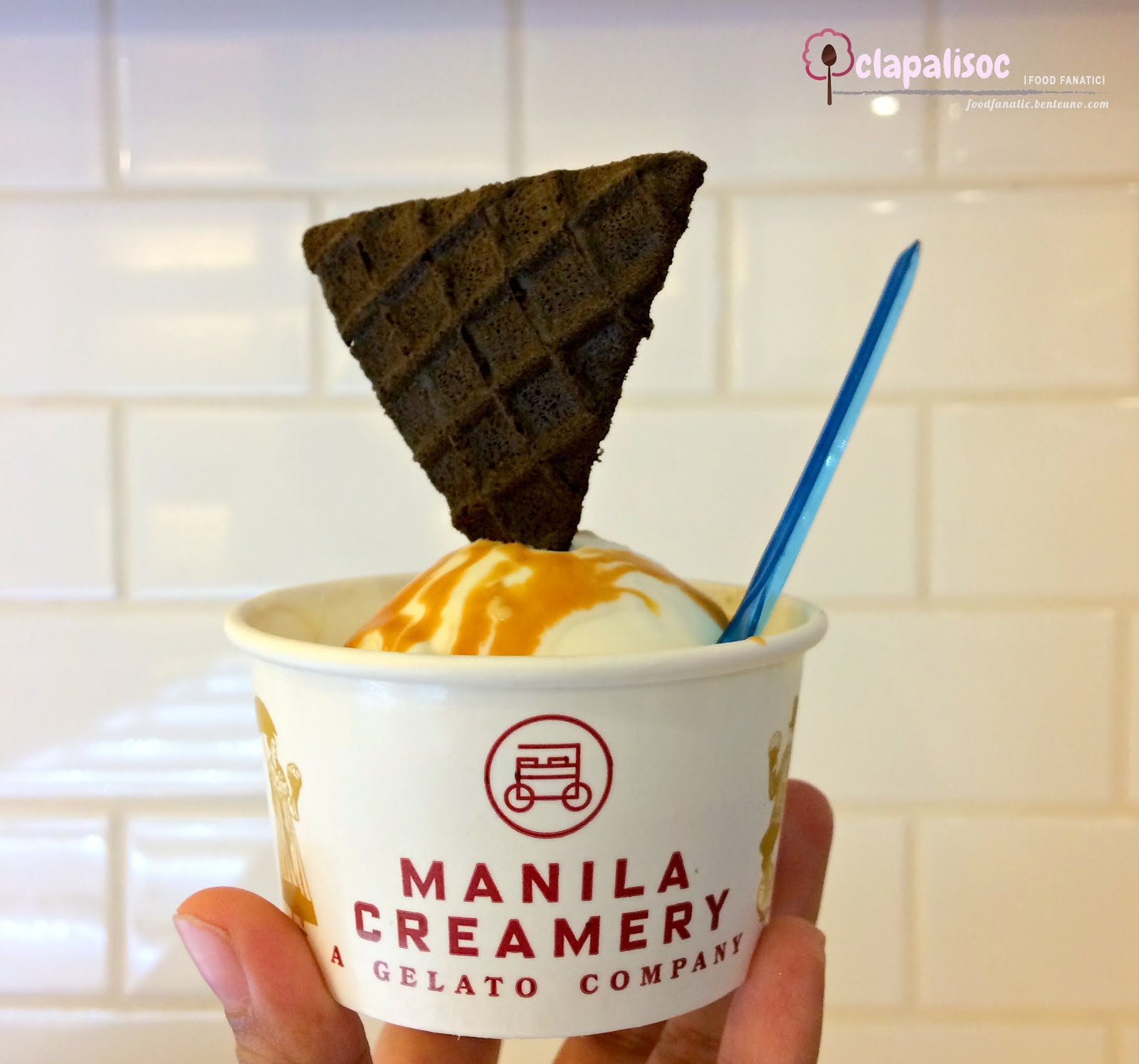 Manila Creamery is one of my top gelato picks and I've been stalking them in weekend markets and Glorietta for the longest time. I love the creativity of the owners when it comes to their flavors. They're so experimental and adventurous! They do not settle for just the usual flavors. Mangga't Suman, Mango Pomelo, Bacio, Guinumis, Tutong na Kanin are some of the unusual flavors that they definitely nailed! They have this magical wand that captures and locks in the flavors - from the real deal food to a gelato form, it's amazing how they transform them into thick, creamy gelato! They also know how to put texture into heir gelato so you will not be left with just the plain ice cream.


Manila Creamery has been camping in malls as a pop-up store and I have been wishing for them to open a full-fledged store somewhere! I mean, it's about time and I believe they already have a good army of followers. That's why the news of their UP Town Center store was such music to my ears! Can't be happier but I also wished that they'll open up a branch in the South area soon!


Their UP Town Center Cafe is located in the cinema area of the new building. It's very easy to locate if you're coming from the parking lot. As soon as you enter the mall, you'll be able to spot it. Well lit, open space and an open kitchen or work area, their gelato selection will greet you right away!


Got the chance to sample some of their creations through an invite that was extended to us by my friend Reich, day before they officially opened to the public. Manila Creamery x foodfanaticph, yay! We were greeted by the owners - Jason and Paolo and Jason told us about what they offer - gelato scoops, gelato shakes and coffee. It was a simple menu that they plan to expand as they progress.


There was one flavor I was eyeing during the visit - Salted Egg Cheesecake Gelato! Salted egg is everywhere and I was very curious how they will play with it. It was the first thing I tried and I was blown away! As usual, the gelato base was thick, smooth and creamy with a nice tangy cheesecake note. It was mixed with graham crumbs giving it a good texture and drizzled with salted egg sauce. OMG! The salted egg sauce is the bomb! It's thick and sweet, notes of caramel and a good salted egg flavor that was filled with umami goodness. I highly recommend to ask them to ADD SOME MORE of the salted egg sauce for a better gastronomic experience.

According to Jason, they only use organic duck eggs and use the yolk without any extenders. I can attest to that because the flavor of the salted egg yolk was really there - locked in and went well with the caramel.


Since I tagged the daughters along, I also asked for a cup of their Kinder Bueno gelato. Of course momma tried it first! It came in highly recommended for the kids by the staff. It indeed tasted like the chocolate itself! Sweet, chocolatey with the signature hazelnut flavor of Kinder Bueno! The little girls loved this too.


Then we moved on to try their gelato shakes. First was the Ube Salted Egg. The cup came in full with not just the gelato shake but with some toppings too! First was the snow white whipped cream that was generously drizzled with salted egg sauce. Second was the slice of Sapin-Sapin and third was the generous smear of Ube Halaya.

One sip was all I needed to LOVE this gelato shake! It was thick and rich, full of purple yam goodness with that salted egg after taste. It's sweet and sinful but definitely worth every calorie.


The Sapin-Sapin was equally good too. According to Jason, they sourced it out somewhere in Blumentritt and he personally likes it.


We also tried their Matcha Taho Gelato Shake. But of course, Matcha-LOVE! Wouldn't pass the chance to try this. Topped with jellies and two sticks of Matcha Pocky, who would have thought that Matcha and Taho can go so well together?!? One sip, ahhhh... genius. It had just the right Matcha kick - not too bitter but not too subtle.


What blew me away was the taho - silky and smooth, it had the consistency of that being sold on the streets! I asked Jason what other ingredients they added there because there was this flavor that I can't distinguish. Jason admitted that they added malted Horlicks into this concoction to enhance the flavors of the key ingredients.


The Matcha Latte was good - just the right proportion of Matcha and milk, bitter and grassy. The Latik Latte was refreshing with hints of coconut and a sweet end note coming from the latik.

Other flavors that I tried and I would highly recommend are the following: 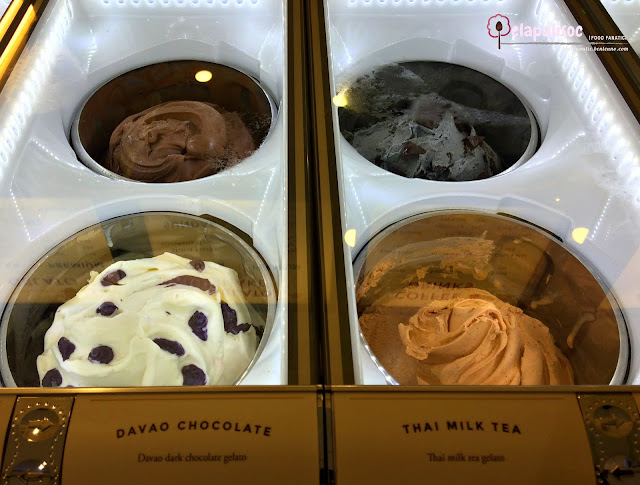 Thai Milk Tea tasted like the real thing! The bitter tea and the rich milk, nice!


Davao Chocolate - if you want that dark, bitter and a little sour profile of chocolate coming from a proudly Pinoy brand - Malagos Dark Chocolate, you should go for this. 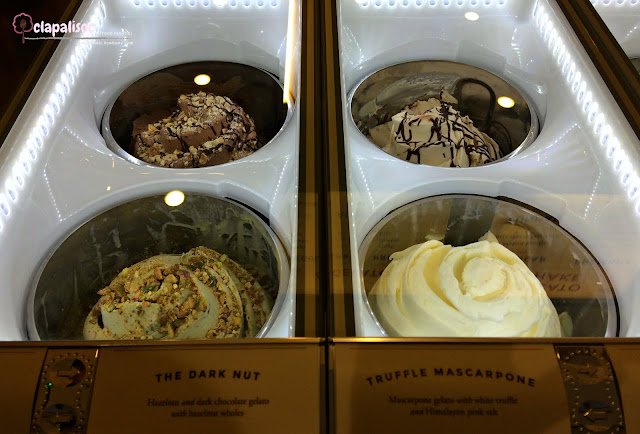 Truffle Mascarpone with just the right white truffle flavor plus a salty contrast from the Himalayan Pink Salt that it's sprinkled with. 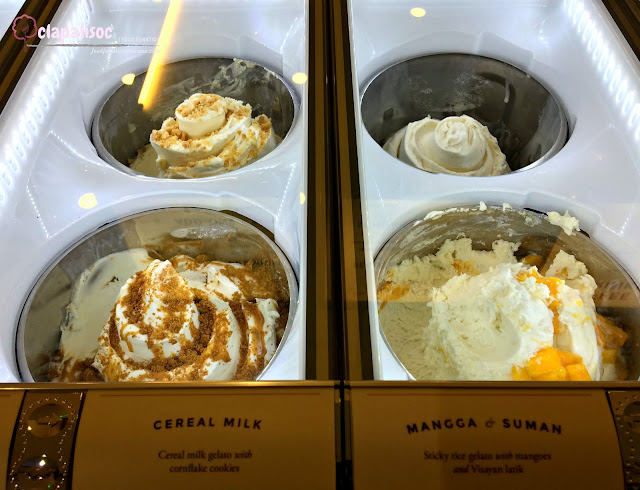 Mangga't Suman - all time best seller which really tasted like the real thing and even had suman bits!


Cereal and Milk - reminiscent of what's left when eating cereals, the soggy cornflakes and the tasty milk, this gelato perfectly captures that!

Both were insanely good! Gelato was smooth and thick and creamy. Mango with Pomelo was bursting with the goodness of sweet ripe mangoes and a hint of pomelo. It had chunks of mango cubes and pomelo pieces too. Perfect summer flavor and a dose of fruit goodness too! Bacio was equally good. Chocolatey with lots of nuts. I can't choose which one I liked more.

My favorite combo! Their black sesame gelato is one of the best in town. The nutty taste of black sesame was so deep and rich that even a small amount would burst so much flavor in your mouth! They also added chocolate shards into this flavor for texture but seriously, no need!

Then their Matcha Green Tea - oh the perfect combo for the Black Sesame. Bursting with that bitter Matcha taste, I loved that it had the right amount of milk in it. The grassy, earthy flavor was there and I must say that it's really good as well.


5 out of 5 Stars for Manila Creamery!