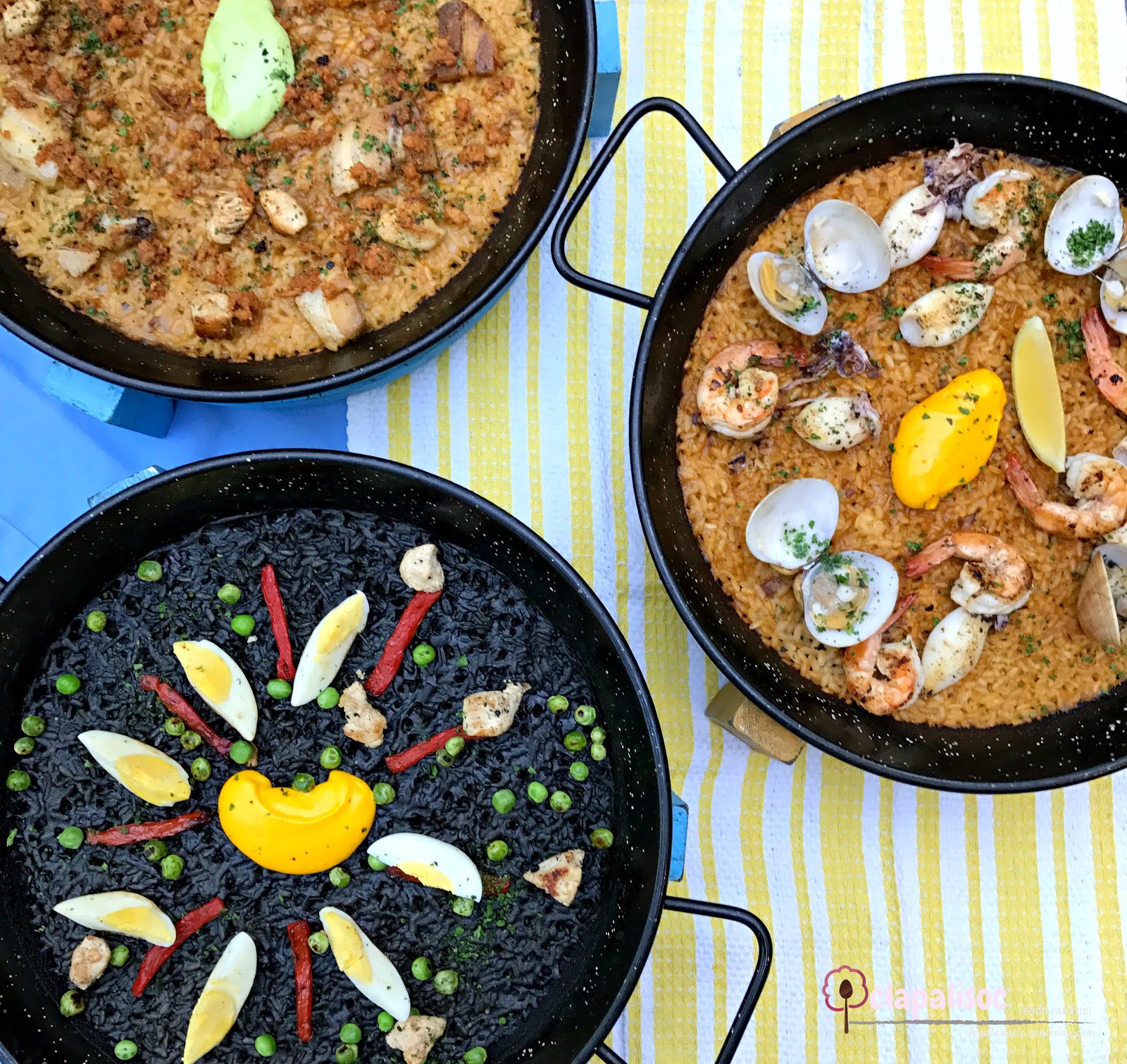 Paella is a Spanish dish that's loved by most Filipinos. Because what's not to love about it? Rice x meat x veggies - staples in our daily diet. Restaurants offering Spanish cuisine, or even those that do not, in our local food scene usually have paella in their menu. Most do not deliver and are merely rice mixed with an assortment of meat and veggies, often in a tomato based sauce.

Rambla is one of our favorites when talking about Paella. Though the price is a bit up there, it's worth indulging once in a while. But there isn't really a place that offers honest to goodness Paella at an affordable price.

A concept born out of the passion for Spanish food by the same group behind Rambla, Las Flores, La Lola and Tomatito! Rico Rico is trying to change the way Filipinos see Paella. From formal and expensive to casual and affordable - the concept is pretty solid! Paella in a food court cooked right in front of you competing with food court stalls in speed, Rico Rico is changing the Paella ball game!

Located in SM Aura's foodcourt, Rico Rico's space is pretty huge allowing them to install a decent kitchen towards the center providing some venue for them to show how they make magic with their Paella. The color theme is also easy on the eyes - white and teal with accents of pastel colors and walls marred with colorful wall arts.

It wasn't my first time at Rico Rico. Visiting during their first couple of days from launching did not serve me well. Good thing I believe in second chances.

We tried some of their tapas, Paellas and dessert to boot!

Let's start off with the Tapas. Croquetas, Chorizo, Salpicao and Gambas - great starters!


Warm balls of mashed potatoes deep fried with some crunchy breading, one bite will give you an explosion of chorizo and cheese! This one's pretty good but can get a little too salty.


One of the tapas that I enjoyed, the chorizo pieces were cooked just right. Tender and flavorful, each piece had a certain bite.


This is their most expensive tapa and it's for a reason. According to their Marketing Head, Dani, they didn't want to compromise the quality of the beef so they made sure to use only the premium kind. You can tell that he's telling the truth because each piece of meat was tender!


Another favorite tapas of mine, succulent shrimps in a spicy oil based sauce, it's nothing like your sauce drenched version from watering holes.


Onto the Paella, we tried a total of four. According to Chef Edgar and Dani, Rico Rico ensures that they only use the best and freshest ingredients possible. They don't take shortcuts nor use magic powders. Nothing canned nor pre-packed. Their stocks are made from scratch as well as each aioli. Their tapas are cooked as ordered as well as each pan of Paella. The passion put into each step to ensure efficiency and good quality is a story they love to tell and it was really amazing to hear them talk about their brand with so much enthusiasm and confidence.

Unlike other Paellas where the ingredients are fixed, this concept will allow you to customize your order. Choose your Paella from the 6 variants - seafood, all meat, veggie, negra, pumped up negra and surf & turf. If you think you want more, add toppings to your heart's content. Each additional topping comes with a price of course. Next step is to choose your aioli. You can go with the recommended ones but if you are more experimental, do it your own way! You can go with the most basic one or go all the way!

Now, lets talk about each Paella we tried --


Vegetable Paella sounds and looks like the most unappealing variant in their menu. May sound boring but I must admit that it was MY FAVORITE Paella of all. So good I even ordered it again when I went back for dinner on the same day. Cooked with veggie stock, this Paella was topped with parsley aioli, crisp veggies like asparagus, young corn, mushrooms, cherry tomatoes and onions.


Dani highly recommended this saying that it's the "sexiest veggie paella in town" lol It's totally not boring at all! From the flavors of the rice itself, I can tell that there was something else than the veggie stock. True enough, there was paprika, garlic, parsley and a dash of cumin that made all the difference. Served with Chimichurri, make sure to ask for more if you want a spicier kick. One last tip: go dirty all the way and mix the aioli with the Chimichurri, rice and the veggies! It's the best way to enjoy their Paellas!


My second fave, this Carne Paella is a meat lovers dream! Liempo cuts, chicken chunks, pieces of beef and chorizo in a chicken stock cooked rice. There was more than enough protein in each spoonful! Paired with parsley aioli, this Paella is one that's highly recommended!

Squid Ink Paella is my favorite kind but surprisingly, it's just 3rd in my list for Rico Rico! Don't get me wrong. This Negra 2.0 is still delicious! Seafood stock, squid ink, saffron aioli - what's not to love? The squid ink flavor was there and I liked it!


Their seafood paella is also one to note. Marisco is usually a crowd favorite in other restaurants because it's seafood! This one's no exemption. Seafood stock, an assortment of seafood (shrimps, baby squid and clams) with saffron aioli, it's tasty and flavorful but weak in flavor compared to the other 3 that I tried.


For dessert, we got to sample their Leche Flan. This was surprisingly good! Served in an unconventional way, mason jar was used instead of the usual llanera.


The bottom was lined with caramelized sugar, topped with the soft silky flan. Make sure to you'll scoop all the way to the bottom of the jar to get some of the sweet stuff that pairs well with the flan itself.


This dessert also has a generous serving of whipped cream on top that tends to cut through the sweetness, if it gets too much for you. This dessert was so good I got it again after dinner!

Overall, it was a pleasant visit. Even when we came back at night for dinner, as paying customers, the food quality and taste was the same and the service was excellent! Rico Rico is definitely one genius concept! I can't wait for them to expand and reach more foodies!