It was a rainy Saturday night and we were to meet a dear friend for some catching up. We agreed to find a place in Kapitolyo - a foodie heaven! We were choosing between Haru Sushi Bar & Silantro but Mexican won over Japanese!

When we got there, the place was packed and we were on the wait list. Waiting time wasn't too bad and we got a seat outside the aircon area. We checked on their menu and were surprised that it was humble but there were items that we needed help with. The servers were there very much hyped up, ready to explain each item!

We got the following ---

Silantro's Pork Ribs - they weren't the fall off the bone type but they were juicy and tasty! Rubbed with some salty marinade, they were grilled to perfection. Some parts were a little hard to cut but that was forgivable. The serving was not bad too for the price.

Beef Nachos - hefty serving! A plate full of nachos smothered with generous heaping of beef pieces, onions, cheese sauce, some more grated cheese & some greens. It was really good! The meat pieces were tender, the cheese sauce was gooey and had the right saltiness and the sprinkles of greens gave it a fresh end note!

Silantro's Burrito - it was tight and packed! The best I've had so far (considering I've only tried Army Navy and Taco Bell for Burrito). It was filled with tender beef pieces and tasty, sticky, yellow rice. Served with a green sauce, rather than the usual salsa, that tasted like avocado mixed with some herbs and with the usual white sour cream sauce. It was filling and I didn't even finish mine!

Completo Lucha Taco - this item would entitle you to 3 different meat. We opted for beef, chicken and lamb and then went for a soft taco. It was served with the taco lying flat, topped with generous amount of meat, tomatoes, onions and a mountain of shredded lettuce with cabbage. It was refreshing and tasty and just so yummy! There was something addictive to the freshness of their meals. I think that's the sprinkle of shredded green herbs included in every order.

You can also opt for single or double meat for 65php and 85php accordingly.

We also ordered for their Fresh Dalandan Juice which was freshly squeezed, according to the server, and their Iced Tea that was home made and brewed for hours! Yay! Both were refreshing though the iced tea was a bit leaning on the bitter side.

Overall, the place had this relaxed, easy going vibe to it. The music was a little too loud though but gave me a jolly feel. The staff were attentive and were ready to chit chat anytime. 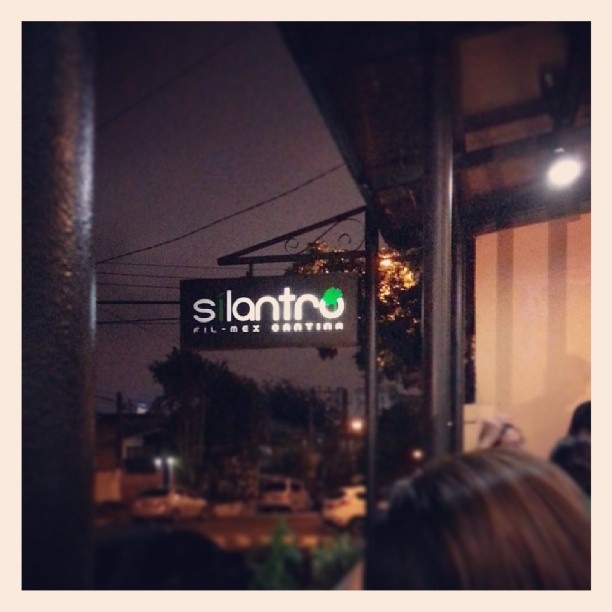 The place was a sure hit, value for money kind. We will definitely go back! We were also tempted to go get their unli Mojito but with a child around, nah! There's always a next time!