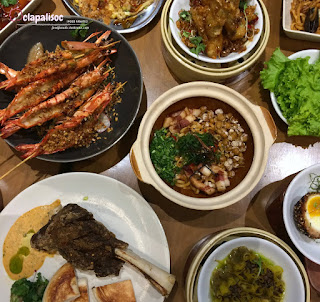 From the brilliant minds behind one of a kind food concepts in the Metro such as Wrong Ramen, Fowl Bread, The Beef, Le Petit Souffle, Freezer Burn, etc. comes a new restaurant that's so easy to love - Ping Pong Diplomacy! The name sounds a little intriguing but a quick check in Google would reveal that Ping Pong Diplomacy is in fact an event in history involving table tennis (or ping pong) between China and the US. Thinking about Forrest Gump? That's it!

He told us that they didn't use any cookbook as reference. He had his team of chefs think out of the box! What was important was their own creative interpretation of the concept and their soft opening menu was the product of this. I think Chef Noel Mauricio did a good job here.


The restaurant itself was one of a kind! Walls painted in blue, one section was full of hands holding table tennis rackets, as if ready to strike! A bit scary at first, and if you think of the place when it's dark lol, but you'll get used to it. It's actually one of the charms of the place making it so unique! Floor tiles of black and white, more tiles (blue this time) on the counters, open kitchen, well-lit and very modern industrial in design - it kinda reminded me of Fowl Bread.

Charlie had us try almost everything in the menu! Isn't he the most generous of all hosts? Let me drill down ---

Starting off with my favorites, the Simple Fried Eggs was indeed one of the easiest to prepare among the dishes but it was a good one! It's basically just scrambled eggs topped with scallions, pork floss and oriental sauce. The pork floss and the oriental sauce made all the difference giving the simple scrambled egg a whole new character - salty and savory! And before I forget, I loved the crunchy edges of the egg!

See the fusion here? It's genius IMO! This was like a deconstructed cheeseburger, only that there's no burger bun. The crisp wonton were packed with tasty ground Wagyu Beef, well seasoned with sharp cheddar. This was served with fresh and crisp lettuce on the side as well as caramelized onion, sriracha and a cilantro sauce. Wrap the "dumpling" into the lettuce and add in the sides, dunk everything into your mouth! Delicious!


You love truffle oil? This one's more than just an olfactory treat! As soon as it was served, the strong and distinct smell of truffle lingered and as soon as I took a bite -- ohhh truffle heaven! Loved the strong kick of truffle, the tasty soup and the mix of mushrooms that quite seemed like meat to me because I was only paying attention to the truffle lol! Not your ordinary kind of yellow siomai here, but it sure was delicious!


This dish is definitely one of my overall favorites that night! It's amazing how Ping Pong Diplomacy will make you eat your veggies! I swear even kids will like this and will not notice that they were actually eating eggplant! The eggplant slices were coated in batter, deep fried and then smothered with "fragrant sauce" and garnished with sesame seeds, herbs and chili! I love it when simple ingredients are turned into something extraordinary without trying too hard.

This dish is more Japanese than Chinese, according to Charlie. They were trying to depict a Teriyaki kind of dish here.


Deep fried chicken wings covered in a strong mix of spices, crunchy and flavorful but nothing so extra ordinary for me though I liked it. The mix of spices was very Asian, reminded me of Serenitea's Chicken Chops.


What is a Scotch Egg, you ask? It's basically hard boiled egg wrapped in sausage meat. Ping Pong Diplomacy's version used pork with shrimps as the shell of the 5 minute egg. The meaty shell was tasty and the egg had a runny center. Loved the side serving of wasabi mayo dip that elevated the flavors of the meaty shell.

This dish is more British than American, Sesame seeds coating the shell + the wasabi mayo gave it its Asian flare.


Mussels and clams in a Tsingtao Beer sauce with dill weed, this dish didn't reach our side of the table though.


Silky tofu, century egg, sun-dried cranberries, plum powder with pork floss on the side, lots of onion leeks and chili on top. I would love to go back for this since I wasn't able to try it that night.

Onto the Big Plates section of the menu, we tried the following: Not Mapo Tofu, Grilled Prawns, Lamb and Beef Ribs.


Mapo Tofu is a popular Chinese dish from the Sichuan Province, known for its very spicy dishes. Usually made up of tofu cubes with ground meat, Ping Pong Diplomacy's version used Steamed Fresh Soya Custard which was silky soft and so smooth, more like "taho" but it was set in a very spicy sauce. Instead of using ground meat, this version used pork slices, that were so tender and with just the right amount of fat trimmings, for that modern twist!


Tiger Prawns on sticks, grilled and topped with lots of crispy garlic and charred pickled veggies. I loved that the tiger prawns were cooked just right, easily peeled skin and juicy meat.


What I didn't like though was that the meat itself was bland, lacking some natural sweetness and "fresh" shrimp flavors. The pickled veggies gave an additional flavor profile to this dish.


I would love to love this dish, I like lamb meat a lot, but I just can't. The components and the overall concept was good - lamb shack with cumin seed sauce with mint on the side, pickled veggies, lots of cilantro and toasted bao, which gave it the Chinese touch. It was like a DIY bao, which is very popular now-a-days. But then the lamb meat was dry. You have to get to the part that's attached to the bone to somewhat enjoy a juicy and tender meat.


One of my favorites during our dinner, the braised beef was so tender! Served with crispy shallots and a generous serving of zhenjang vinaigrette, this dish had the right balance of sour, sweet and salty.

We also got to try all of the dishes under the Rice & Noodles section of the menu: Dan Dan Rice, Chickpea Noodles and Surf & Turf Noodles.


Oh my heart! My favorite from Fire in the Hole, a pop-up concept in Whole in the Wall, I was more than glad to be reacquainted with this dish. You have to be prepared if you'll order this coz it's one super spicy dish!


Sitting on top of warm rice is a generous serving of crispy chicken skin, fermented chili bean and toasted peanuts. Garnished with lots of sesame seeds, onion leeks, crispy shallots, green peas, lots of chili and a sunny side up egg, you can request for a less spicy version or maybe ask them not to top it off with red chili. You won't be able to stop munching because the chicken skin itself was so cholesterolific good, plus lots of texture and flavors that went well together.


Another hot dish, this had thick Lo Mien noodles, deep fried chickpeas, thick cut bacon strips lots of onion leeks and spring onions in a thick and spicy sauce. This dish did not really leave an impression aside from the bacon.


I was hoping for a nice and runny egg here but that didn't happen. But I guess that's alright because this was one delicious dish! Loved the tender slices of Char Siew, the salty and somewhat sweet but definitely spicy sauce.

Then there was dessert. We tried all three!


Taro, ginger and black sesame mochi balls on a bed of pistachio cream, topped with sesame crumble. The black sesame was very evident but the taro and ginger - not so.


What I liked about this dessert though was the pistachio cream! It was thick and had a nice toasted nut flavor - just go ahead and bathe the mochi balls with this cream!


I honestly didn't know that this dish was made up of Jicama (which I needed to google while writing), commonly known as Mexican yam bean or simply Mexican turnip. All along I though I was eating apples! It's a little deceiving but if you come to think of it, when turnip is cooked in sugar with cinnamon, it will really turn out just like apple pie filling! Anyhow, this dessert was a deconstructed pie with puff pastry and compote served side by side together with a Five Spice Ice Cream. Now, I'm not surprised that the ice cream tasted so good because Chef Miko Aspiras made it! Kinda reminded me of Freezer Burn's Cinnamon Milk ice Cream.


My favorite dessert of all was the Mungo Buchi. I love Hopia, the Tipas kind! I can finish a small box all by myself and golly I just did yesterday! This dessert had deep fried buchi, red bean puree and a heavenly scoop of mungo hopia ice cream which had chunks of hopia! Oh my heart! Hopia heaven in every scoop! I can probably consume a pint of this ice cream in one go!


For my drink, I went with Mango Tarragon Smoothie coz I was intrigued how the flavors will play out. Surprisingly, the tarragon part was very subtle. I'm curious how it will taste like if there was a stronger tarragon taste. I shall request that next time!


I also went for an order of HK Milk Tea. Got this just out of curiosity - if it will taste like that of Milk Trade. Sadly, I liked the one from Milk Trade more. This drink was too bitter and needed some more sweet milk. I asked for some ice in an attempt to water down the bitterness but I ended up with a bland milk tea - watered down indeed LOL


Overall, I loved our dinner here and I am excited to go back! Most of the dishes were spicy but you can always request for them to adjust the level of heat. They will also be launching new items in about a month, so that's really something to look forward to.

Warning: if you are looking for authentic Chinese dishes, this is not the place for you. Their dishes were very playful in terms of flavors and combinations so some might not appreciate this kind, especially if you are not the adventurous type.

4 out of 5 Stars for Ping Pong Diplomacy!